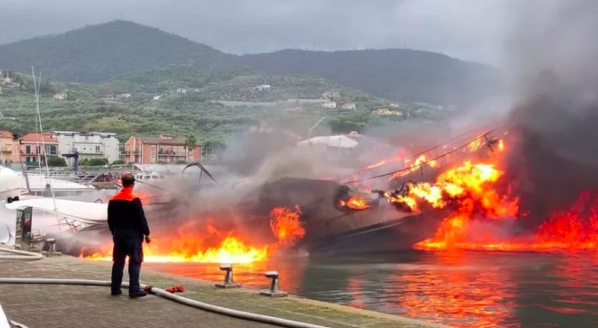 At around 13.15 on Friday 2 October, a fire broke out on board 29m Ferretti-built Lady Vanilla that was berthed at Marina di Loano, Italy. According to initial reports, it is believed that the fire developed in the engine room, with initial observations suggesting the conflagration began when batteries overheated therein.

The fire service arrived on the scene and it took them over two hours to extinguish the flames, a task that was made all the more difficult by Friday’s strong winds. As a precaution, about 30 workers from the Yacht Club di Loano were evacuated.

While the exact circumstances on board Lady Vanilla are not known in the lead up to the fire, initial reports seem to suggest that the fire on board this yacht is a near-perfect example of why insurers have major concerns about minimum manning standards and battery technologies.

Speaking with Paul Miller, director of marine underwriting at Hiscox, earlier in the year, Miller commented: “[One] of our concerns, which has been exacerbated by COVID-10, is the minimum manning requirement on private vessels at the lower end of the superyacht spectrum – in so far as there are none.

“During Typical wintering periods (which have now been extended) we are seeing a number of unmanned private vessels in marinas and shipyards. Alternatively, there may be some that only have one crew member on board for a limited number of hours in each day. In the event of the fire, these unmanned or minimally manned vessels pose a serious risk to the vessel and other vessels in the vicinity. Fire is our major concern. There have been too many fires on board superyachts, some of which have spread to neighbouring vessels because of the lack of manning requirements.

Indeed, the situation has become so dire where yacht fires are concerned that many major insurers are looking at implementing their own manning requirements within policies.

“It is as if people expect fires to only occur between the hours of 09.00-17.00. However, invariably the fire occurs at the most impractical times of the day,” continues Miller. In other situations, there may be a senior crew member who lives 45 minutes away from the vessel. In the event of a fire, 45 minutes is far too long to mitigate serious damage. Taking a 30-40m composite superyacht as an example, we like to see at least two crew members permanently on board that have an operational knowledge of the safety systems and who could, feasibly, in the event of an emergency move the vessel if needed in order to mitigate the possibility of there being multiple losses.”

While it must be noted that there will be a period of investigation before any conclusions can be drawn from the fire on board Lady Vanilla, if the initial assumptions prove to be correct that the fire was caused by an overheating battery, then Lady Vanilla would become the most recent in a series of lithium-ion battery-related incidents. Indeed, it has long been accepted that these batteries pose a serious fire risk on board superyachts if the various systems that require them are not stored and maintained properly.