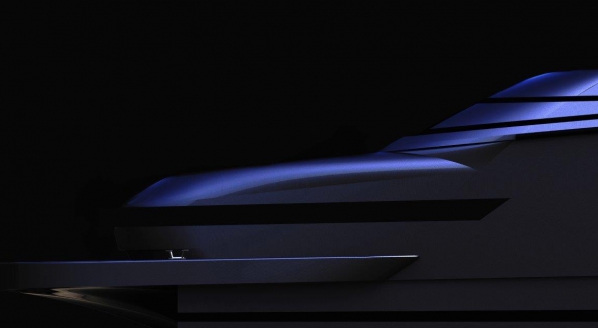 Italian yachting brand Pershing, a part of the Ferretti Group has revealed a new semi-custom project which has been created to ‘usher a new era, with an innovative momentum that is sure to shake things up in the yachting world,’ according to the shipyard.

Designed by Fulvio De Simoni together with the shipyard’s engineering department, Pershing’s new TØ Project range will span from 25-40m and will reportedly cater to the ‘new demands of customers.’

Although the final details of the project remain confidential at this stage, the shipyard has released a series of tantalising renderings and artistic shots with the unveiling. These renderings do indicate that there will be some telling Pershing design cues that retain the shipyard’s identity, such as the grill in the bow.

There are four cornerstones to the project that make up the basis of the brief; design, on-board liveability and comfort, technology, and performance.

But, from the design perspective, the TØ range is said to represent a new design paradigm for a Pershing, with a strong identity. So, as more details are revealed in the coming months, we may be in for something quite different from what Pershing has done before.

Pershing has promised that many areas on board the yachts will be open to the sea as part of the on-board liveability focus.

The first yacht of the new range is planned to be unveiled at the 2020 Boot Dusseldorf show where the full details of the project will be revealed.

According to data supplied by The Superyacht Agency, Pershing now has three yachts under construction over 30m, with a cumulative LOA of 109.15m.