While a number of years ago the 30-50m sailing yacht sector was considered to be a relatively popular and competitive sector, the market today is quite different. As the superyacht market opened up to new demographics of UHNWIs the movement away from traditional sailing and towards the motoryacht sector hastened as most chose to engage with an asset class that was deemed to be more flexible and practical as the sailing yacht experience became less and less about the sailing itself and more about the various luxury pastimes that go hand in hand with the contemporary superyacht lifestyle. As a result, the legitimate options for 30-50m sailing yacht buyers today are few and far between.

Such has been the sporadic nature of this sector in recent years, using a 10-year delivery cycle to analyse performance would be ineffective due to the number of ‘top-performing yards’ that are no longer operational. A five-year cycle, therefore, is of far greater use. Of the top-performing builders in this sector, Southern Wind Shipyard stands out having delivered seven projects in the last five years, followed by Baltic Yachts that has delivered five projects. 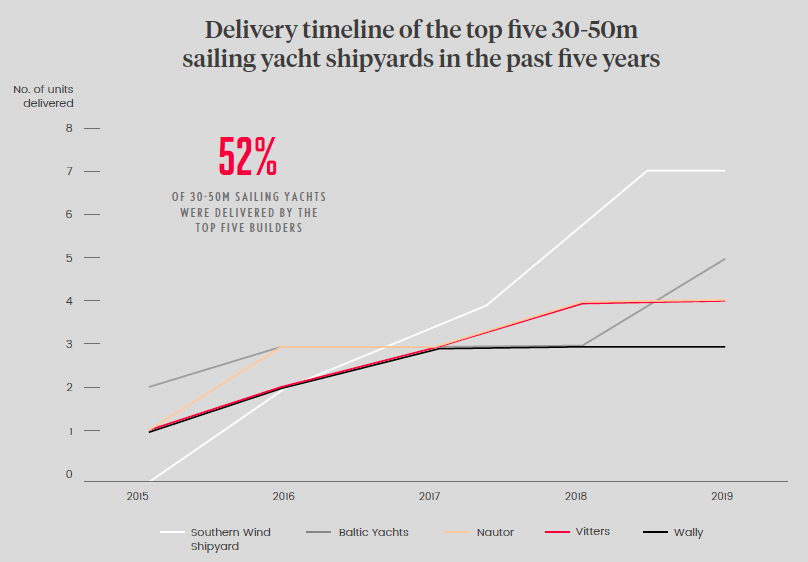 This is not to say, however, that build slots are hard to come by in this sector. While orders and deliveries are certainly down, a number of the shipyards that are known for building in this range have refocused their efforts on more popular size ranges. Therefore, when approaching a build in this sector it pays to be aware of the performance of certain shipyards across a range of sectors, rather than entirely putting stock in the results of the 30-50m market.

While new orders and deliveries are not what they once were, deliveries are outperformed by sales, which suggests there is still an active market for these vessels, albeit not necessarily new projects. In fact, between only the top five brokerage houses, dominated by Northrop & Johnson, more vessels in this range were sold than were delivered by the entire market between 2015-2019, suggesting that when extrapolated out to include other brokerage houses, a more active market emerges.

To explore the performance of the 30-50m sailing yacht sector including deliveries, sales, age vs final asking price, depreciation rates and more, be sure to download your complimentary version of ‘A Buyer’s Guide to the 30-50m Sailing Yacht Segment’ and click here.

Our Superyacht Market Reports have been created by Superyacht Intelligence, our team of in-house market analysts. With insight and data spanning every sector of the industry, the team is available to support the most bespoke strategic requests. If you are seeking unrivalled insight into a segment of the market, click here to download a free report outlining the scope of our services.