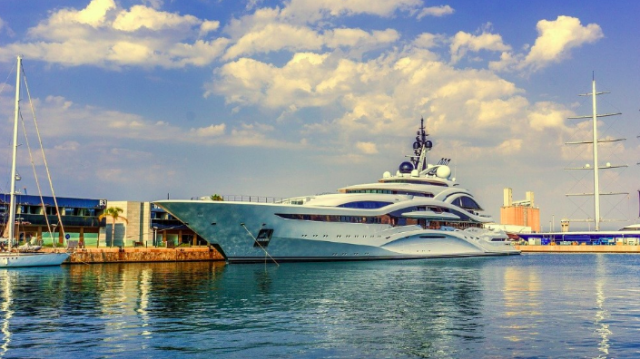 In Wealth-X’s COVID-19 Wealth Impact: The World Ultra Wealth Report 2020 the wealth data platform and analysis specialist explores the effect of the COVID-19 pandemic on the globe’s ultra-wealthy population. While the initial decrease in wealth was swift and severe, much of this wealth has been recovered throughout the year. SuperyachtNews considers what impact the discoveries therein will have on the performance of the superyacht industry.

“The global spread of COVID-19 in early 2020 has made a considerable impact on the ultra-wealthy. The introduction in many countries of fairly stringent lockdown restrictions, social distancing measures and travel bans had a huge effect on the global economy, bringing to an immediate halt the essentially unbroken upward trend in the global growth of the ultra-wealthy over the past decade,” starts the report.

According to Wealth-X, UHNW wealth, far more than any other wealth demographics, is determined by the composition of their holdings. Indeed, private and public holdings account for 56 per cent of UHNWI assets, which is a much higher proportion than that of those in lower wealth brackets. This reflects the world’s ultra-wealthy population’s tendency to either own or operate businesses and to invest widely in public companies as part of wealth planning and protection strategies. With many major economies struggling as a result of the COVID-19 pandemic the stock markets have become extremely volatile throughout 2020 and, therefore, the majority of the world’s ultra-wealthy have experienced declines in the fortunes.

“The ‘sudden stop’ to large parts of the global economy, a slump in financial markets and sharply heightened consumer, business and investor caution resulted in an 18 per cent decline in the UHNW population over the first three months of 2020. At the end of March, the ultra-wealthy class totalled 238,060 individuals, a drop of almost 53,000 from its level at the end of 2019,” explains the report.

“The hit to UHNW wealth was more severe, with collective net worth plunging 28 per cent to $25.4trn, down from $45.4trn at the end of 2019. This was the equivalent of virtually there entire UHNW wealth stock in Asia being wiped out over the space of three months. The nature of the crisis meant that almost all asset classes suffered – but the main channel of wealth loss was via the stock market as investors made a huge ‘flight to safety’. At the end of March, the MSCI World Equity Index was down by 21 per cent (in dollar terms) from its end-2019 level, with a number of major stock markets booking losses of more than 30 per cent.”

That being said, while there was an extremely steep initial downturn this has been counterbalanced by a shorter than average recovery. By the end of August 2020, the UHNW population was down only three per cent from the close of 2019, representing a significant recovery from being 18 per cent down at the close of March. Indeed, by the end of August, the combined net worth of the global UHNW population was only nine per cent down ($32.2trn) than it was at the end of 2019.

“This is not to downplay the continued risks over the path of the coronavirus and the likely ‘scarring’ effect that are expected to emerge, such as business failures and higher unemployment. However, as the global economy rebounded in the second and third quarters of 2020 from its temporary cessation of activity, helped by extensive stimulus and support programs, there was a broad bounce-back in financial markets and renewed opportunities for wealth creations as economies reopened,” continues the report. 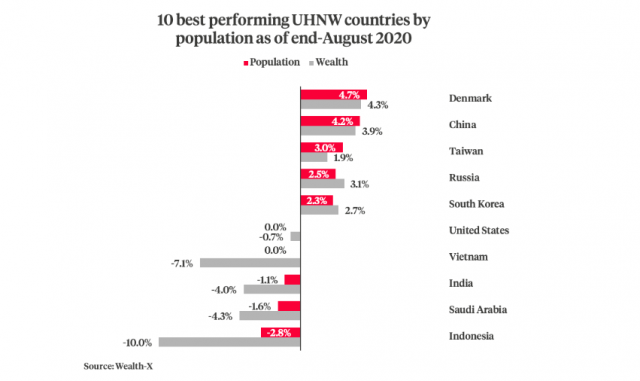 As of the end of August 2020, China, Russia and the United States all rank amongst the top 10 performing UHNW countries by population, two of which represent stalwart nations for superyacht deals and the other remains a great hope for the growth of the superyacht industry in the future. Conversely, a number of Europe’s dominant nations rank amongst the worst performing UHNW countries by population, which may raise concerns for parts of the superyacht market moving forward. However, the pandemic has also changed the spending habits of the ultra-wealthy population. Instead of cutting back on luxury purchases entirely, many have continued to spend big, but have internalised the goods and services by bringing them into their own homes. Furthermore, according to the Wealth-X report: “There has also been a re-prioritisation for safety, security, and well-being. Real estate agents are seeing a demand spiral for high-end properties that are closer to nature and offer a greater sense of protection…”

While the report does not directly reference the superyacht industry, it is not difficult to draw parallels between the allure of secluded homes that are closer to nature and superyachts. Indeed, one could argue that you can hardly get closer to nature than being on a superyacht. While this trend certainly bodes well for the yachting market, its benefit should not be overstated. Traditionally, superyacht ownership has only attracted a small portion of the world’s ultra-wealthy population and this is unlikely to change as a result of the pandemic. Nevertheless, the desire to internalise luxury and bolster safety and security may help push some deals over the line. It should further be noted that these wants will more than likely influence how UHNWIs choose to holiday, making superyacht charter a particularly appealing option.

During the initial panic caused by global lockdowns and plummeting stock exchanges, the de facto prognosis was one of irreparable long-term damage to the superyacht market. Of course, this fear was born more out of uncertainty than anything else, with no previous pandemic scenarios available to model financial recovery or superyacht market recovery, thoughts turned to contract cancellations, force majeure clauses and a non-existent charter market. However, as the period of lockdown persisted and the financial markets began to recover, it came abundantly clear that the UHNWI population were still eager to take delivery of superyachts. Furthermore, when the charter market opened once again, a great many guests chose to engage with superyacht charter. The financial recovery highlighted within the Wealth-X reports, as well as the growing desire for private luxury highlights that the future remains bright for the superyacht industry.